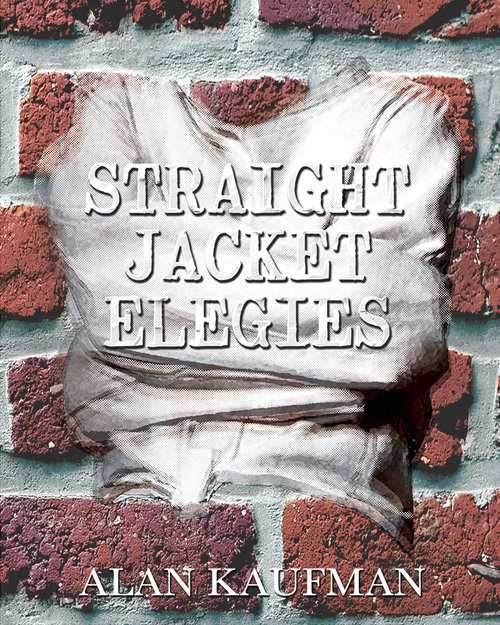 Straight Jacket Elegies evinces all of life’s beautiful, sordid banality in Kaufman’s blunt spoken word style. Influenced by Whitman and the Beats, New York’s slam poetry movement and the infamous, confrontational readings of Cafe Babar, Kaufman takes us on a trip through the dark, underbelly of modern America. Both an homage to David Lerner, and a testament of survival, Straight Jacket Elegies is a time capsule into the hopelessness of the Reagan era, when epidemics stood on every street corner declaiming the falsehoods of a shining city on the hill and the decaying of the American Dream. But it is also a call to arms for all the poets and lunatics and lovers in the world to speak up, to shout to the heavens, to survive by any means necessary.

What they are saying about Alan Kaufman:

" An abundance of suspense, curiosity, wonder and awe.... I want to congratulate and thank Alan Kaufman for enriching my life...

"Raw in its passion and lacerating in its testimony.”

Here is one of our favorite poems from Straight Jacket Elegies:

ON READING WHITMAN'S
SONG OF MYSELF AT ONE O'CLOCK IN THE MORNING
An image or two stuck:
the swimmer tossed into the sea and surfacing
with damp curls, reborn, beside himself with joy,
and further on you enjoin the student,
me I guess,
to destroy you, the teacher,
and that will spread your breast
BANG!
You're dead
I'm out here, Walt, rushing broke
down Mission to beg Unemployment
to cut me a check
I'm out here in dry dock,
spilling my guts like a dweeb to a bunch of drunks
whose names I don't know,
and I'm thinking I'll have these narratives
from Hell tattooed on my skin,
so I can step up to cops,
rip off my shirt
and shout: Read this!
Because underfoot, Walt,
is not grass but flames
I'm living the private American inferno
where anguish is something you do at home,
behind locked doors; terror
expressed to strangers in rented rooms
anonymously, and late at night
over telephones to friends, who sob in turn
of their own HIVs of incurable hepatitis
enlarged livers secreting
schizophrenic genes of utter emotional
drear, shame success tumors,
and harrowing despair at the ghosts
of their walking fathers
I am laughing by kitchen light, Walt,
bent with rot-toothed
grin over your most famous poem,
watching my reflection
in the night of ashtray eyes
and lips shaped by the vowel of Oblivion,
and tonight, Walt, I am James Dean
on the day of his death,
I am Marilyn Monroe's baby grown,
the second one she lost,
and all that I have been
is falling down
like a house of cards
in this room by-the-week,
with my iodine-dabbed
gangrenous leg like a seated shriek
I am shrieking, Walt, for a drink,
for a fix, for a mother, for a God,
for a kindness, for a child,
for a prayer I can say
without sneering in my guts
I'm asking, Walt,
have you got like me
slant eyes, hook nose,
black skin and Spanish lips,
do they let my type with dick,
one ball, big tits, mascara, wig,
pumps, two wombs
and cocktail dress into Heaven?
I'm, sick of Wonder bread, Walt
Have you got democratic steak for me?
Have you got red-blooded boneless
shoes for me, without holes, a lot
of ketchup, size twelve?
Because I'm years in the alleys
in the garbage cans in the rain
laying for you with a poem like a gun
I don't know what's got into me
I'm trigger obsessed
Must be the Bronx where I grew up
Must be Bronx make me
hard as an aerial snapped
off a car, as a packed
Saturday night special,
and I wanna rumble,
Walt, I wanna mix it up
I'm infected with the virus of the poor
who never read the Norton Anthology of Modern Verse
Who sing madrigals of bucked teeth,
harelip and rickets, recite sonnets
of executed eviction summonses
for unpaid back rents, and job
applications to Macdonalds,
and critically deconstruct
stab wounds painted with Mercurochrome
I've got a vision, Walt, of savage
love for the one-eyed drunk,
the limping thief, the unshaven
cabby in drag
I've got a vision, Walt
of the cosmic benefit
of sound nutrition
of medical attention
of housing and of voice
in a truly democratic society
on the filthy piles of flesh
dying on the pavement
I've got a vision of extended hand
of lifting arm
of healing souls leafing and loafing
in winter coats and resoled shoes
and of their lonely power to destroy you,
once and for all, old teacher,
and spread your breast a billion-fold,
to absurd bursting point, like gout,
and not just your breast, old fella,
but your neck and cheeks,
guts and buttocks and knees
will swell, inflamed with their angry joy
And the poor will not drown in the sea
Their deaths, for too long
given over to God, will return to us
with restored trust
in the thriving intimacy of the earth
and from love we will come
and with love we will see
even in the hour of our greatest blindness
that to an even gentler love we go